SUCCESS
Your information has been submitted
9/4
2019
ZS - Proper Setup, Missed the Entry
by Frantz Herr

Sometimes the setup is there and recognized, but the entry isn’t taken.  This is a psychologically damaging mistake because it results in not being in a trade and repeatedly wishing that weren’t the case.  This happened to me earlier this year with ZS.

Here is the setup on the stock’s weekly chart: 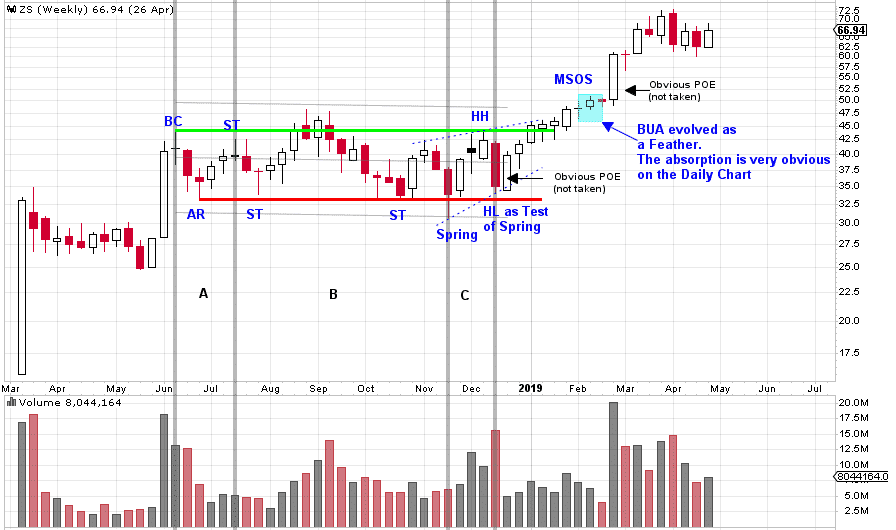 I had been stalking this stock for a considerable period.  I had correctly identified its TR and Phase |A|.  The week of December 17 there was a sharp retracement from a UA back into the range.  This was followed by a strong reversal bar the very next week on lower volume that displayed Ease of Movement.  This had the feel of a LPS, and I was 90% convinced that it was, but I hesitated.  Why?  The December 17 high volume bar.  I even sent my concerns to Roman for discussion in WTPC which I was enrolled in at the time.  His answer was what the chart was showing, that the intention of sellers was to drive the price below support and it obviously failed.  So the test which I was still anticipating had just happened!  I wasn’t thinking ‘Second Point of Fear’ and LPS as a retest of the Spring of the TR which occurred the week of November 19.  I didn’t execute at the first obvious POE.

Over the next several weeks the stock rallied into a MSOS.  This resulted in a second potential POE March 1 which I didn’t take either. The daily chart below reveals this second POE in more detail.   I didn’t recognize the Feather, at the time. 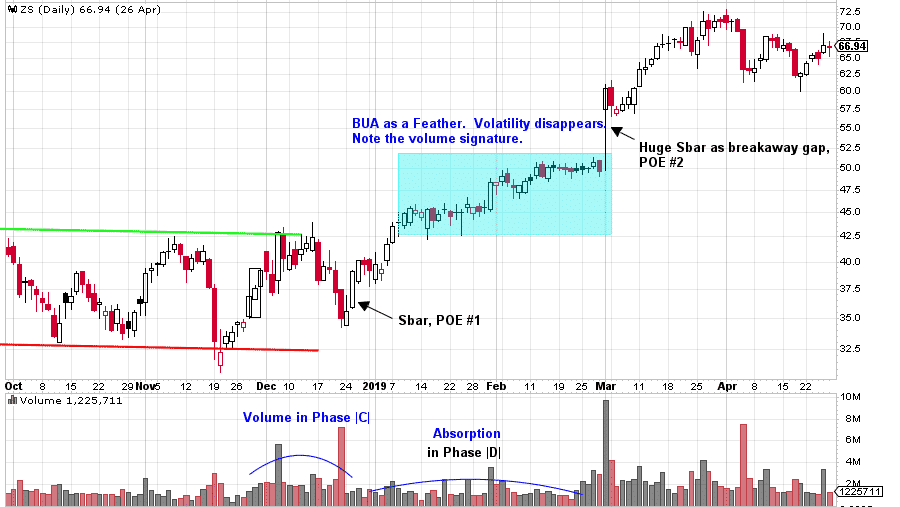 It is becoming clear to me that I am in desperate need of a Trading Plan.  I have obtained Roman’s 2017-2019 specials on the subject and am well along in my development efforts.  The post trade analysis involved in writing this blog has been immensely helpful to me in many ways.